Kaulig Racing is thrilled to welcome back SRS Distribution as a primary partner on board the No. 16 Chevrolet at Las Vegas Motor Speedway in the Alsco Uniforms 302.

Kaulig Racing’s partnership began at the 2022 NASCAR Cup Series (NCS) season-opener, with Heritage Pool Supply Group Inc (Heritage), one of the nation’s leading family of independent pool and supply distributors and a division of SRS, with Daniel Hemric for the 64th-running of the Daytona 500.

Recognized as one of the largest and fastest-growing building products distributors in the United States, SRS will team back up with Kaulig Racing this time at Las Vegas Motor Speedway with Allmendinger for the first race of the Round of Eight in the NASCAR Xfinity Series (NXS) playoffs. 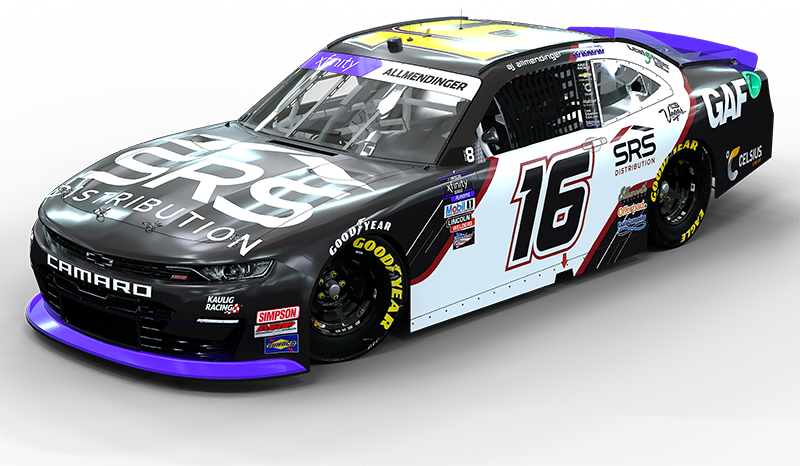 “With Allmendinger behind the wheel, our partnership with Kaulig Racing will accelerate into high gear with the Vegas race.”  said Dan Tinker, SRS President and CEO, “Seeing SRS in the victory lane at the Las Vegas Speedway during the NXS playoffs would be the ultimate win for our teammates and customers across the country.”

Allmendinger, who has already secured himself into the round of eight in the NXS playoffs, has made three starts at Las Vegas in the NXS, winning in his very first start, and securing a pole award earlier this year in the Alsco Uniforms 300.

“We’re so excited to be welcoming back SRS Distribution this year, only this time in a different capacity,” said Chris Rice, president of Kaulig Racing. “We had a successful partnership with SRS and one of its subsidiary companies, Heritage Pool Supply Group with Daniel (Hemric) at one of the biggest events in motorsports. Hopefully we can secure ourselves into the Xfinity Series championship race by getting SRS into victory lane in Las Vegas.”

Kaulig Racing announced earlier this week that Allmendinger will return to full-time NCS competition in 2023 after competing for this year’s NXS championship title.

The Alsco Uniforms 302 will take place on Saturday, October 15 at 2 p.m. CT with coverage on NBC.

Founded in 2008 and headquartered in McKinney, Texas, SRS Distribution has grown to become one of the largest and fastest-growing building products distributors in the United States. Since the Company’s inception, it has established a differentiated growth strategy and entrepreneurial culture that is focused on serving customers, partnering with suppliers, and attracting the industry’s best talent. SRS currently operates under a family of distinct local brands encompassing more than 650 locations across 44 states. SRS Distribution is a portfolio company of Leonard Green & Partners, L.P., and Berkshire Partners LLC. For more information, visit www.srsdistribution.com.

Kaulig Racing™ is a full-time multi-car NASCAR Cup Series (NCS) and NASCAR Xfinity Series (NXS) team, owned by award winning entrepreneur, Matt Kaulig. Established in 2016, Kaulig Racing™ has made the NXS Playoffs consecutively each season since the playoff system started and made the Championship 4 round in both the 2020 and 2021 seasons. They will continue fielding three, full-time NXS entries; the No. 10 Chevrolet driven by Landon Cassill, the No. 11 Chevrolet driven by Daniel Hemric, and the No. 16 Chevrolet driven by AJ Allmendinger. With multiple wins, Kaulig Racing has come to be one of the top competitors on track each weekend. The team made multiple starts in the NCS in 2021 and won in its seventh-ever start with AJ Allmendinger’s victory at “The Brickyard” for the Verizon 200 at Indianapolis Motor Speedway. The young team has acquired two charters for the 2022 NCS season, with Justin Haley competing as its first, full-time driver in the series. The team’s second entry will be shared by part-time teammates AJ Allmendinger, Daniel Hemric and Noah Gragson. To learn more about the team, visit kauligracing.com.